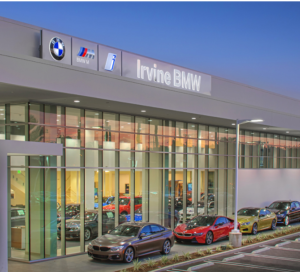 The Shelly Group, which has eight auto dealerships in five locations in Southern California, has allowed JMG to steer its security system programs since 1999. It all began that year when Lee Crecelius recommended JMG to the project manager responsible for supervising the building of Irvine BMW. At the time, Crecelius was General Manager at Shelly’s Saddleback BMW and a personal friend of JMG co-founder Ken Jacobs.

“I had nothing to do with the decision to hire JMG,” Crecelius remembered. “Bob Deck, the project manager, was unhappy with the alarm companies he used at our other locations and asked for referrals from those of us at a meeting.”

After making the decision to go with JMG, Crecelius remembers Deck’s rationale. “He said that JMG’s reputation for service, quality of people and ability to understand our needs made the difference.”

Crecelius went on to say, “It was very gratifying for me to make the referral and then step back and see Bob so satisfied with the relationship and that it has lasted so long. Bob went on to have JMG secure every Shelly facility as they were built, or when their security contract expired.”

After Deck retired last year, Crecelius succeeded him as Facilities & Projects Manager. To date, JMG secures six locations including a collision center and auto auction operation in Signal Hill. Last year, JMG’s video surveillance was ideally placed to capture the image of the perpetrator of a car theft on the auction lot. “The very next day the culprit returned and our service manager spotted him from the clear picture we had found on our video system recorder,” Crecelius added.

Now in his 11th year with the Shelly Group, Crecelius serves as its V.P. as well as Facilities & Projects Manager. Last year, under his direction, JMG updated the existing system at Irvine BMW with new cameras providing expanded coverage and an upgraded access control system.

“JMG has a huge responsibility with us,” Crecelius explains. “The typical dealership has an inventory valued in the millions and we average almost 90 employees at each location we want to keep secure as well.”

Lee’s experience with JMG echoes that of his predecessor. “Shelly annually reviews all of its vendors in terms of value,” he said. “Everyone associated with JMG gives the entire team high marks for responsiveness, integrity and product capability.”

Samsung Names JMG Dealer-of-the-Year
JMG Provides Spectra with the “Answers”
A Team Effort for 30 Years
Feedback on Service Is Easy And Essential
22nd Annual JMG Benefit Golf Tournament To Be Held May 17
You’ve Been Notified of an Alarm. What Should You Do Next?